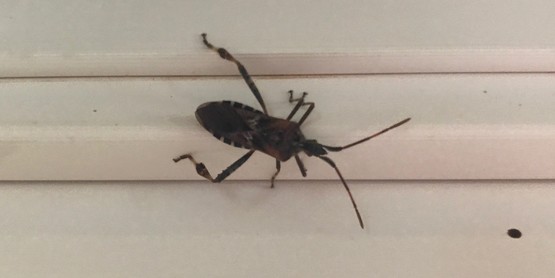 The Western Conifer Seed Bug can be a nuisance within buildings

The Western Conifer Seed Bug is a type of leaf-footed bug that feeds on seeds of trees, especially pine. It is not a destructive pest in the home, but merely a nuisance. They find their way into homes during the end of summer and early fall looking for a place to spend the winter. They emit a foul-smelling odor when disturbed, handled, or crushed/squished. Also, the sound of their wings while in flight resembles the buzzing noise of a wasp or a hornet, which can be unnerving and startling when one flies past your ear or lands on you.

It is native to North America west of the Rocky Mountains ( California to British Columbia, east to Idaho and Nevada) but has in recent times expanded its range to eastern North America, and has become an invasive species in parts of Europe.

This information has been compiled bu Cornell Cooperative Extension of Columbia and Greene Counties.