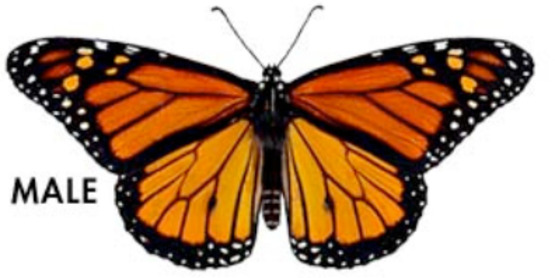 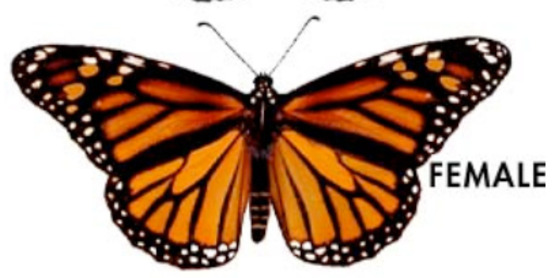 Not only is it a beautiful insect, the Monarch butterfly goes through a captivating metamorphosis and then tops it off with an unbelievable migration that can span all three North American countries. This insect has captured the fascination of the public to such an extent that a tourist industry has been built around migration routes and overwintering sites.

Life Cycle: The Monarch butterfly is easily recognizable due to its characteristic orange wings with black veins and black outer margins with white spots. However, the Monarch begins its life as a tiny fertilized egg carefully placed by its mother on the underside of a Milkweed leaf. After three to five days the Monarch caterpillar emerges from its egg and immediately starts to consume the milkweed leaf, which is the only food source for the caterpillar. Though the “milk” in Milkweed is toxic and distasteful to many animals, the Monarch concentrates these chemicals in its body as a means to protect itself predators. Once the caterpillar reaches about two inches in length, 200 times as big as they were when they hatched, it forms a chrysalis, in which it makes its metamorphosis into a butterfly within two weeks time.

Migration: Sensing the shortening day length and cooler temperatures, Monarch butterflies throughout the US and Canada begin their migration to specific sites in the mountains of Mexico, where tens of thousands cluster together on a single Oyamel tree. Here, they hibernate until March, when environmental signals again tell them it is time to head north, back into the US in search of milkweed on which to lay their eggs as there is no milkweed at the overwintering sites. The generation that completes the full southward migration and winter hibernation will die during their northward migration and their offspring continue the journey toward the breeding grounds. It takes two to three generations to complete the journey to the northern US and Canada. Scientists still don’t fully understand how the Monarch knows when and how to migrate such long distances to a place they have never been.

Habitat for milkweed and flowering plants is vital for the survival of the Monarch, both in their summer breeding grounds, as well as along their migration routes. Take a look at the additional resources for more information, especially for tips on preserving/creating habitat for Monarchs in your area!

Monarch Watch — a cooperative network of students, teachers, and researchers dedicated to the study of the Monarch

CCE will be hosting a free Monarchs in our Schools Program this fall. Elementary teachers and community educators, grades 3-5, are eligible for a monarch hatching and monitoring kit free of charge. The Monarchs in our Schools program allows students to partake in hands on scientific learning. Students will be able to see the butterfly’s life cycle right before their eyes!

Enrolled classrooms will receive their monitoring kits along with an educational program from Anna Harrod-McGrew, 4-H Natural Resource Educator. This educational program may be in-person or provided via video or ZOOM. Students will learn about the importance of pollinators and how to care for monarch caterpillars at each stage of their lives. Additional educational materials and activities will be provided along with the kits for teachers to use as they watch the caterpillars transform into butterflies. There will be no teacher training required this year.

Whether students are in the classroom or learning from home, monarch kits can offer a wonderful opportunity for experiential learning. Despite challenges presented by COVID-19 we are excited to offer this unique opportunity to up to 20 classrooms in Columbia and Greene Counties. Classroom monarch kits will be delivered to teachers in early September as the monarch butterflies must hatch and begin their journey south before the end of September.

To register for Monarchs in Our Schools, please contact Anna Harrod-McGrew at (518) 318-1180 or ash252@cornell.edu. This program would not be possible without the generous financial support of The Rheinstrom Hill Community Foundation. Their support helps to make our educational programing a reality. 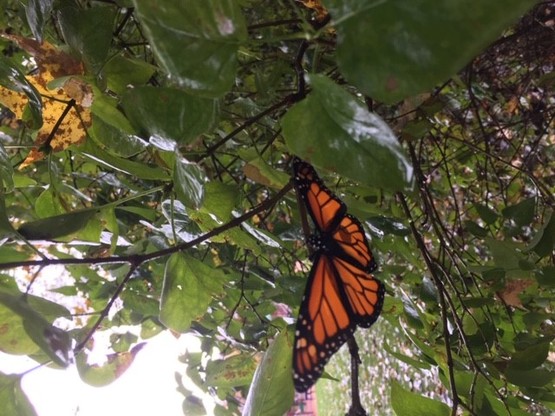 There are no upcoming events