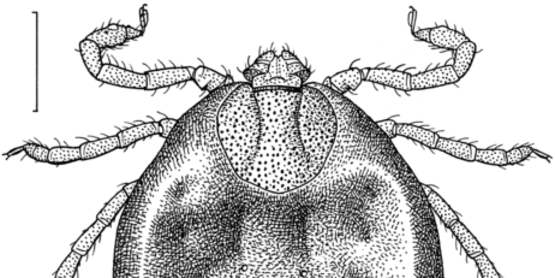 New York residents are being urged to take the same precautions to protect themselves from the Longhorned Tick (Haemaphysalis longicornis Neumann) as they would to guard against the deer tick.  The Longhorned Tick or East Asian tick, has now been discovered in New Jersey, Virginia, West Virginia, North Carolina, Arkansas and, recently, New York.  Native to China, Korea, Japan and Pacific islands and nations, the longhorned tick has only been known to science for about nine years and is thought to have been in the United States since at least 2010. Nymph, male and female life stages of blacklegged ticks at the top, nymph and adult of the longhorned tick below, compared with poppy seeds. Photo: Jim Occi, Rutgers University

The longhorned tick feeds on a wide range of mammals and birds, including cattle, sheep pigs, chickens as well as bear, deer, fox, rabbits, smaller mammals and wild birds. It also feeds on dogs, cats and humans. This tick spreads quickly through herds of domestic and wild animals. It may have arrived in the US through human travel or the transport of animals, as the USDA has intercepted specimens at inspection points in US ports. Wild migratory birds can carry these ticks, and so can animals that move great distances, such as coyotes. Even though it has been discovered in just a handful of states, the longhorned tick is likely much more widespread.

An interesting aspect of the biology of longhorned ticks is that females can reproduce asexually through a process known as parthenogenesis. Females do not need to seek a mate and can reproduce quickly and spread rapidly into new areas. It is a cold-tolerant species that can overwinter, and therefore it is expected to spread northward.

The longhorned tick is capable of transmitting diseases to livestock animals, including horses, sheep and cows. This means a significant risk to the dairy and livestock industry from tick-borne theileriosis, a malaria-like disease that results in anemia and possible death of cattle and sheep.

This exotic tick can also carry a few serious disease organisms that affect humans but we still do not know if it can transmit those pathogens to people. In one recent case, a child in New Jersey found a longhorned tick crawling on her body, but was not bitten. That tick tested negative for known pathogens. However, a single tick specimen cannot define the disease risk that we might face, so we need more information.

Longhorned ticks are difficult to identify, especially in the younger stages. Adults are plain brown but look similar to brown dog ticks. You can submit ticks for identification to one of the tick ID services listed at the bottom of the Northeast Regional Vector Center webpage.

For more details about the exotic long-horned tick, see the Northeast Regional Center for Excellence in Vector-Borne Diseases fact sheet.