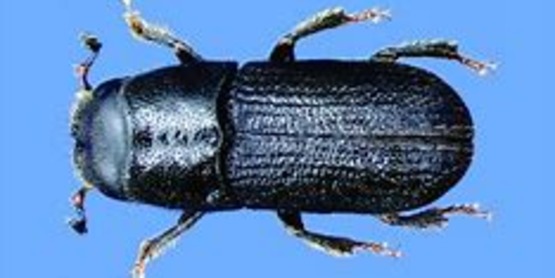 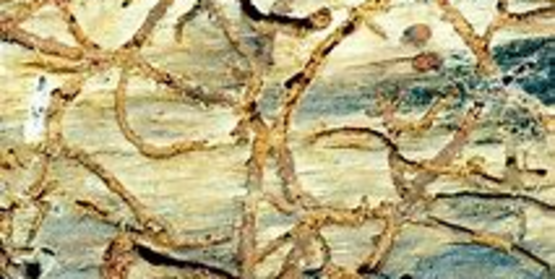 Southern pine beetle has recently been spotted in Albany County, NY killing pine trees.  This invasive bark beetle, that infests pine trees, was most likely blown north by the winds of Hurricane Sandy in 2014.  It is native to the southeastern United States but has been expanding its range up the Eastern Seaboard in recent years.  It has been attacking local conifers in Long Island, Bear Mountain State Park, Minnewaska State Park Preserve Schunnemunk State Park, Roosa Gap State Forest and Albany Pine Bush Preserve.

The adult southern pine beetle (SPB) is 2 to 4 millimeters(mm) in length, about the size of a grain of rice.  They have a rounded abdomen and are brownish black in color.  Males and females are capable fliers.  Larvae are wrinkled, yellowish-white, legless grubs with prominent heads and stout, dark mandibles.  Mature larvae are about 7 mm long.  Dependent upon temperatures, the beetles complete their life cycle - egg, larva, pupa and adult - in 35 to 60 days.  Depending on location, 3 to 7 generations (broods) may be produced annually.

All pine trees are susceptible, including pitch pine, red pine, and jack pine.  In addition to pines, hemlocks and spruce may also be affected in highly infested areas.  No hardwood species are affected.

Conifers infested with southern pine beetles will have small pitch tubes or rusty red "popcorns' of resin as the tree tries to push out the beetles' attempts to bore into the bark.  Bark beetle attacks can be recognized by the presence of boring dust, pitch tubes on the outside of the bark; characteristic galleries under the bark; and beetle adults and larvae in the inner back.  Infested trees' needles will turn to a copper color in the early stages of attack;  as the tree dies, the needles will turn brown and fall off.  This transition can happen in the span of a month.

The beetle can persist for years at very low numbers, sometimes going unnoticed. At other times, however, the population can explode, rapidly killing pine trees across the landscape.  This switch between high and low population numbers is influenced by the availability of dense pine stands, the number of natural enemies, the types of fungus present, tree defenses and changes in climate.

Eradication of this pest is not feasible because it has been widespread, moves quickly, and is present in neighboring states.  The major focus of DEC has been to suppress the infestation by cutting down infested trees to disrupt the beetles' life cycle.  Thinning uninfested trees is beneficial because increasing the distance between the trees disrupts the beetles' ability to communicate as they spread out more, searching for trees to attack.